Silicon Nanochip That Can Reprogram Development Of Your Body Cells 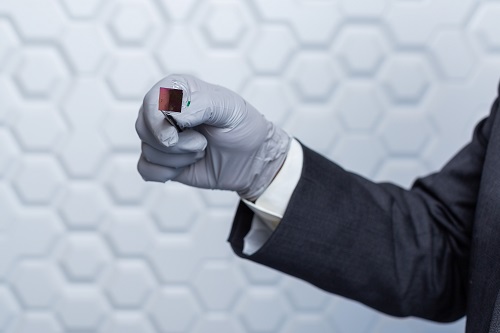 Certain health conditions are treatable with medicines and medical surgery, but those that aren’t, leave the affected person to live with the condition for the rest of their lives.

Now that can change.

Researchers at the Indiana University School of Medicine have devised a silicon nanochip that can reprogram skin cells in the body to turn into new blood vessels and nerve cells, making the device a potential source for treating people afflicted with various health issues.

Based on a technology called tissue nano transfection, the nanochip is a non-invasive device that can reprogram tissue development by delivering a cargo of specific genes through an array of microneedles to the affected area.

The microneedles become activated to transfer the cargo with the application of a harmless electric spark in a fraction of a second.

“This small silicon chip enables nanotechnology that can change the function of living body parts,” said Chandan Sen, director of the Indiana Center for Regenerative Medicine and Engineering, associate vice president for research and Distinguished Professor at the IU School of Medicine.

The nanochip has been successfully demonstrated to convert skin tissue into blood vessels for repairing an injured leg. With this, the device is suited for the therapeutical treatment of other injury types such as brain damage caused by stroke or preventing and reversing nerve damage caused by diabetes.

“For example, if someone’s blood vessels were damaged because of a traffic accident and they need blood supply, we can’t rely on the pre-existing blood vessel anymore because that is crushed, but we can convert the skin tissue into blood vessels and rescue the limb at risk,” said Chandan Sen.

Because the nanochip avoids the use of stem cells to convert an adult cell from one type to another, the device doesn’t require elaborate lab procedures for development and is simple to use.

“The chip’s nanofabrication process typically takes five to six days and can be achieved by anyone skilled in the art,” stated Chandan Sen.

From being a prototype to now in the fabrication phase, Sen hopes to seek FDA approval for the chip within a year, thereby allowing the chip to be used for clinical research in hospitals, health centres and emergency rooms.

Sen and his team of interdisciplinary experts continue to develop and innovate this first-of-its-kind technology at the Indiana Center for Regenerative Medicine and Engineering.