The latest processors are improving every aspect of performance and efficiency. As much as they are getting faster, they are also more energy-efficient and reliable. They are now capable of machine learning and deep learning, ensuring reliability and efficient operation—regardless of the workload.

Amongst many types of laptops being manufactured, selecting the right laptop is usually based on computing needs and requires a vast amount of not only research but also resources. It is important to understand some of the significant parameters and technologies associated with laptop processors. Since last year, there have been many advancements in this area. Let’s have a look at some of the trends that have scaled the laptop processors industry.

There are other advantages associated with multi-core processors such as keeping the clock speed at an efficient level while also increasing the processing power when multiple cores are implemented on the same die. Moreover, in multi-core processors, the individual cores are running at the same speed as a single core, resulting in consumption of less energy—though clock speed is multiplied.

Threads, on the other hand, logically manage the processes to enhance the speed.

Threading is like pipelining, where a CPU is allowed to execute multiple tasks at the same time. Multithreading, like the name suggests, runs multiple threads of execution within an operating system that can include multiple system processes. Hence, threads are a virtual component that manages tasks to improve throughput and computational speed-up.

Most of the latest laptop processors feature sixteen threads, which means sixteen sets of instructions can be managed within a single processing core.

Clock speed is the number of calculations the processor can perform in one second. High clock speed refers to fast speed and processing, requiring more power, the result of which is more heat being generated. Every processor has a base clock speed.

Most processors nowadays mention boost frequency. For example, Intel i9-11980HK processor has a base clock speed of 2.6GHz and turbo boost speed of 5GHz. But most of the time you might not need 5GHz speed, or even the base speed of 2.6GHz.

This is where overclocking comes in. It is a process that takes in a clock frequency and changes its multiples. Every processor has a low-level clock frequency, like 200MHz. A 13x multiplier has a clock speed of 2.6GHz. Therefore, for the right processing power, upscale and downscale of frequencies can be done.

The turbo boost modes in processors are essentially overclocks, but in this case the system chooses the speed. Whenever there is a need for more clock cycles, the system will first check the temperature. If there is sufficient thermal overhead for overclocking, it will boost the speed as long as the system requires the boost. The amount of time the speed is boosted also depends on the processor’s temperature. 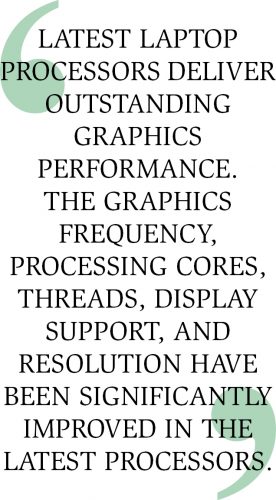 Newer AMD Ryzen processors, on the other hand, feature 2,000MHz of graphics frequency.

The graphics performance, however, mostly depends on the core architecture. The new GPU architectures will often lead to more efficient performance, accompanied by lower power consumption and the use of new technologies to enhance the user experience.

The newly released AMD Zen3 core architecture aims to improve graphic performance of the processor by focusing on single-core performance, energy efficiency, and reduced latencies. According to AMD, this allows the frames per second (FPS) to increase up to 11% in certain games. It has higher instructions per clock cycle. In particular, it can extract an average of 19% additional performance from every MHz of frequency relative to the Zen2. Higher IPC and unified 8-core complex is a potent combination for increased graphics performance.

There are various thermal management systems available from AMD and Intel. But before making a choice, it is important to know the amount of heat the processor generates. The measure of the amount of heat generated is called TDP (thermal design power). It is measured in watts and refers to the power consumption under the maximum theoretical load.

The Intel Core i9-11980HK processor features configurable TDP with TDP-down of 45W and TDP-up of 65W. TDP-down mode is used when cooler and quieter operation is needed. This mode specifies lower TDP and lower frequency operation than the nominal value (processor’s rated frequency and TDP). The TDP-up mode is used when extra cooling is available. Configurability here means that the computer manufacturer can modify the TDP of the CPU within the specifications, depending on the chassis and the type of cooler used.

Today’s intelligent computer systems can learn from the feedback taken to enhance user experience. So they can adjust operations after continuous exposure to data and other inputs. Machine learning (ML) refers to a process in which the machine actively learns for itself from various past inputs without being explicitly programmed. ML uses algorithms just like human neural networks, and these algorithms are designed to improve performance over time as they get exposed to more data. The future performance can thus be enhanced by learning from the response received by the user.

Deep learning is a subset of machine learning that is more advanced and goes beyond the latter to solve problems. It makes use of deep neural networks to access, explore, and analyse vast sets of information. An easy example would be all the music files on Spotify being considered to make ongoing music suggestions based on the tastes of a specific user.
Latest i9 processors from Intel feature the Intel deep learning boost—a set of embedded processor technologies designed to accelerate AI deep learning use cases. It combines Intel Advanced Vector Extensions 512 (AVX-512) with a new vector neural network instruction (VNNI) that significantly increases deep learning inference performance over previous generations.

In situations where power and performance are necessary, Intel Gaussian & Neural Accelerator (Intel GNA) provides power efficiency always-on support. The GNA is designed to deliver AI speech and audio applications such as neural noise cancellation without the involvement of processing cores. Therefore, the GNA performs the AI speech-related tasks while simultaneously freeing up CPU resources for overall system performance and responsiveness.

The Apple M1 chip includes Apple neural engine for accelerating ML tasks. This engine consists of a 16-core architecture, capable of 11 trillion operations per second. This enhances the machine learning tasks like video analysis, voice recognition, and image processing. Moreover, it is more effective and efficiently utilises the hardware. Specifically, it uses machine learning to learn how to become more efficient in processing and power consumption based on historical data obtained from day-to-day user-to-device interaction.

The Mediatek’s MT8192 and MT8195 Chrome book processors integrate a high-performance AI processing unit (APU) to power a wide range of voice and vision based applications. The APU combines the advantages of Edge AI and Mediatek’s AI ecosystem, Neuropilto. This means that the AI processing is done on the device rather than on the cloud service, thus keeping the information about the device usage entirely private.

The Qualcomm 8cx Gen 2 5G processor comes with a dedicated Qualcomm AI engine, which means it uses the Snapdragon 8cx Gen 2 architecture at its full potential to deliver capabilities like intelligent camera, voice UI, and security, turning your PC into a hub of mobile productivity and entertainment. The AI engine uses deep learning methods for increased power efficiency across hardware and software. Moreover, the engine aims for a human-like understanding and behaviour to IoT devices. 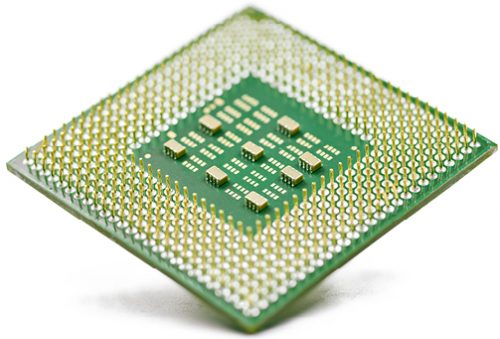 Enhanced image processing units. The complementary metal-oxide semiconductor (CMOS) image sensors of the mobile camera do not sense red, green, and blue wavelengths for each pixel. It only senses one colour for each. Now, it is the job of image signal processors (ISPs) to interpolate this image by applying methods of computing. In addition, the ISP does all other housekeeping; it controls autofocus, exposure, and white balance for the camera system. Moreover, modern image processors can correct lens imperfections as well as things like HDR recombining, noise reduction, other filtering, face or object detection, and conversion between colour spaces.

Intel’s AES New-Instructions (AES-NI) is featured in their latest processors for a wide range of cryptographic applications such as applications that perform bulk encryption/decryption, authentication, random number generation, and authenticated encryption.

Apple M1 processors integrate the latest Secure Enclave for enhanced security. Secure Enclave is a hardware component, more like a coprocessor, integrated in almost all Apple chips. It runs a microkernel and boots it separately from the rest of the device. During this boost sequence, the Secure Enclave generates an encryption key valid for a very short time and embeds it with a user ID that is inaccessible by rest of the processor. The key is used to verify authenticity of any data written in the device’s memory by the Secure Enclave.

When authentication data is sent from biometric sensors to Secure Enclave, it authenticates the data and sends the CPU the notification. The CPU then permits the user to unlock or make purchases with the device.

Intel processors include many more security features such as:

Qualcomm processors enable 4G and 5G connectivity in laptops. They integrate the Snapdragon X55 5G Modem-RF system, supporting 5G (sub-6 GHz and mmWave), 4G LTE, and Wi-Fi 6. The cellular connectivity in laptops eliminates the need for trusted Wi-Fi networks. Whenever needed, the system automatically switches between the trusted Wi-Fi and cellular networks, depending on location. The wireless modem-RF system also receives accurate navigation and location based services with location awareness. 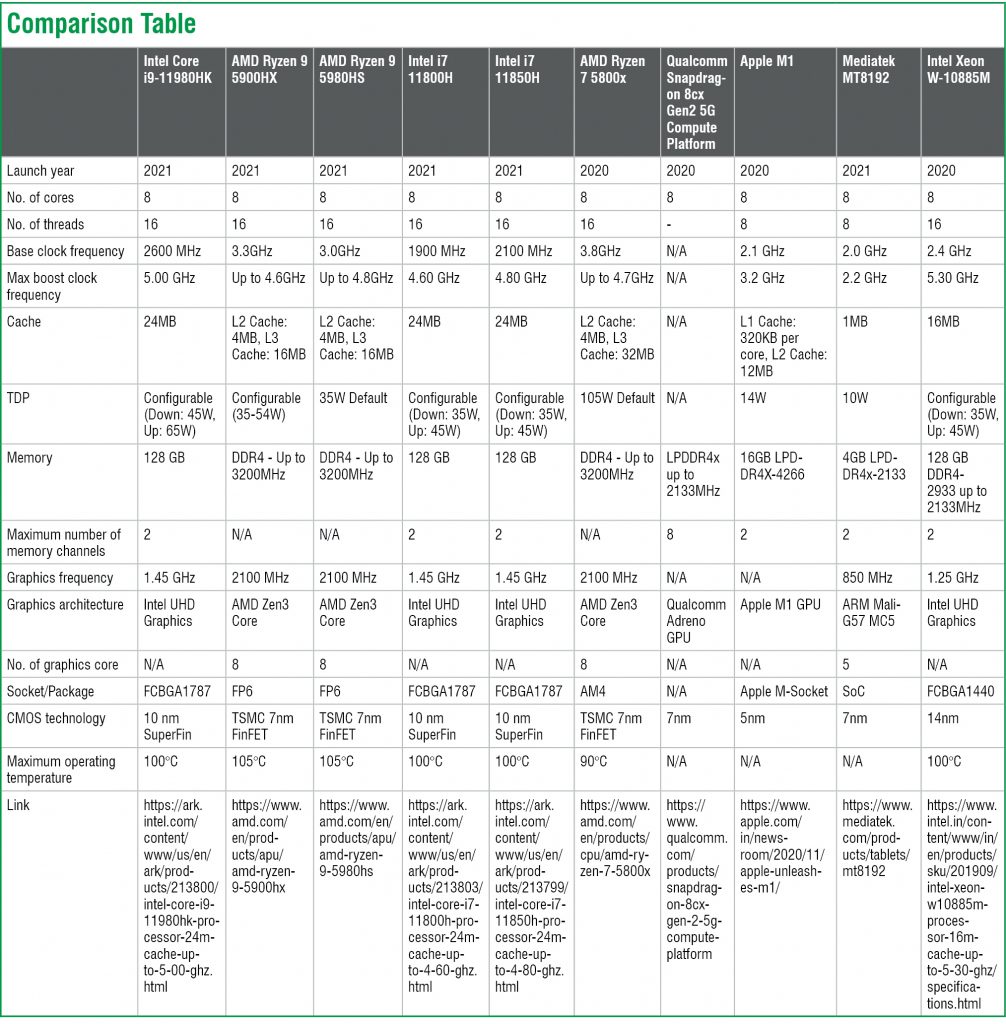 The latest processors are improving every aspect of performance and efficiency. As much as they are getting faster, they are also more energy-efficient and reliable. They are now capable of machine learning and deep learning, ensuring reliability and efficient operation—regardless of the workload. Also, the processors are integrating more high-performance GPUs for gaming and video streamings. In a nutshell, they are becoming way better in terms of speed, performance, and power consumption.

Darshil Patel worked as a technology journalist at EFY until recently.