Phi Mainboard 5LC is a 3D printer controller with a focus on network connectivity. In addition to all the things that other controller boards can do, Phi provides a web interface that you can use to interact with your printer over the local network. With Phi, you no longer need a separate single-board computer (like a Raspberry Pi), which saves you money, simplifies setup, and spares you from long start-up times.

While Phi’s feature set is geared toward 3D printers, it can also be used to drive other digital-fabrication equipment, such as CNC machines. 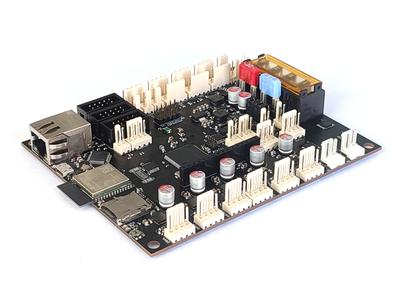 Brains—plural. Powering Phi are two processors: an ESP32-S3-WROOM module and a SAM E51 microcontroller. The former handles networking, SD storage, USB communication, and displays; the latter handles kinematics, stepping, digital and analog I/O, and other realtime controls. This delegation of roles ensures that motion control and other time-sensitive operations do not get bogged down by networking.

Whether your network is wired or wireless, Phi has you covered. You might start out using your printer over Wi-Fi, then decide to run cable at some point in the future. Or vice-versa!

Note: Because the Wi-Fi drivers for Espressif chips are available only as binary blobs (without source code), Phi will ship with firmware support for Ethernet only. For personal use, however, you will be able to build and upload firmware with Wi-Fi support. We will strive to make this process easy, even for non-developers, and to ensure that it does not require specialized tools.

Phi’s web interface, Duet Web Control, allows you to upload G-code files, configure settings, start jobs, control the device, and monitor prints. It even adapts to various screen sizes, so you can use it from a PC, a tablet, or a smartphone.

Ten seconds after you power it on, Phi will be serving the Duet Web Control interface, which will await your instructions. And G-code uploads are fast, as well: up to 800 KiB/s on Wi-Fi and 600 KiB/s on Ethernet (though of course YMMV).

Phi might not have a USB port for connecting a webcam, but you can still use some IP cameras to get a video feed of your machine in the web interface. One affordable, DIY option is to use an ESP32-CAM module.

Phi runs RepRapFirmware, which has a huge legacy in the 3D-printing world and is credited with introducing numerous advancements. It supports Cartesian, delta, CoreXY, polar, and most other kinematics. More importantly, you can configure RepRapFirmware without having to rebuild it. Most settings in the firmware, especially those related to kinematics, are configured using G-Code, so you can even make changes on the fly!

Support for a Wide Range of Hardware

If you want to go all-out with the display, Phi supports PanelDue in both 4-pin and 10-pin configurations. If you’re interested in a more basic display (since there’s a web interface anyway), Phi also supports ST7920/ST7565-based 128 x 64 graphical LCD displays like the RepRapDiscount Full Graphic Smart Controller and the FYSETC Mini 12864.

Phi supports all of the expansion options you might expect – NeoPixels, BLTouch and other Z-probes, thermocouples or PT100s (using daughterboards), SSRs (for heated chambers), VFDs, accelerometers, filament monitors, etc.

Phi was created using open source and freely-available tools: KiCAD for schematic capture and PCB layout and GCC and CMake for firmware development. Phi’s schematic, PCB layout, and firmware will be publicly available on our GitHub shortly after the product ships. 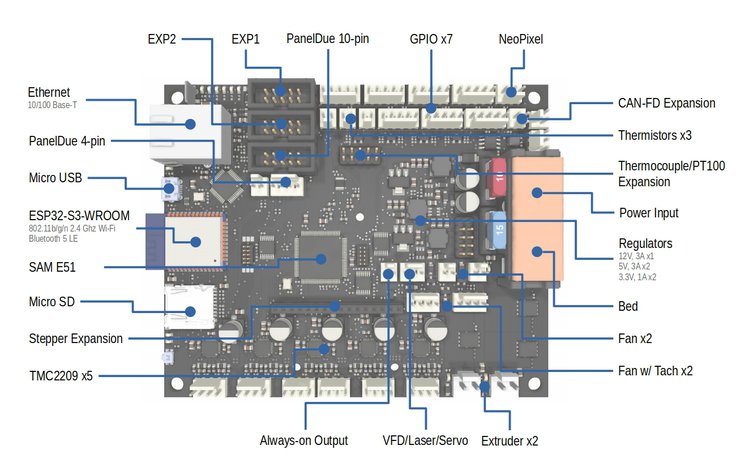