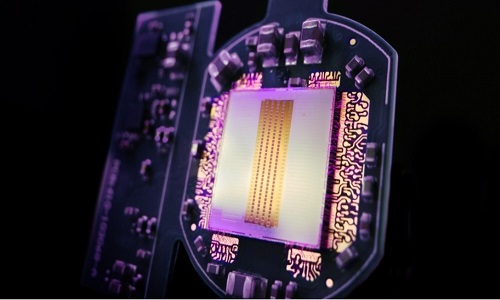 Featuring a highly sensitive SPAD photodetector that’s combined with an on-chip digital signal processing for counting over one trillion photons per second, and outputting up to 5.2 million points per second is the new and powerful lidar system on chip (SoC), the L2X by Ouster.

By doubling the maximum data rate of Ouster’s OS digital lidar sensors, the can L2X handle all the logic and signal processing, and also process both the strongest and second strongest returns of light for each pixel.

While maintaining its same small size and low power draw, the L2X helps power OS sensors. This integration enables the OS sensors to provide even richer point cloud data that improve the sensor’s ability to detect objects through environmental obscurants such as rain, fog, dust, snow, and even a wired fence.

By consolidating all the complexity of analogue lidar onto a single silicon CMOS SoC, the L2X offers improved sensing performance while reducing costs over time. The lidar technology progression along Moore’s Law curve delivers improvements to performance and cost that will help to make lidar ubiquitous.

The OS sensors can also withstand high levels of shock, vibration, solar interference, water and dust while reliably providing high-quality data, no matter the weather conditions, thanks to the L2X.

“Whether it’s a robotaxi driving on a foggy morning, an excavator operating in a dusty construction zone, or a last-mile delivery robot navigating through a steam vent on an NYC sidewalk, our sensors must not only be mechanically reliable and robust, but also reliably output high-quality data,” said Mark Frichtl, Chief Technology Officer at Ouster.

“With the new L2X chip, Ouster has achieved another key milestone on its product roadmap with the ability to reliably detect objects behind obscurants. We designed the new L2X chip to perform better within all types of weather conditions, further demonstrating the inherent advantage of digital lidar.”

How To Mirror Your iPhone To Roku